Does God have a right and left hand?

ГлавнаяUncategorizedDoes God have a right and left hand? 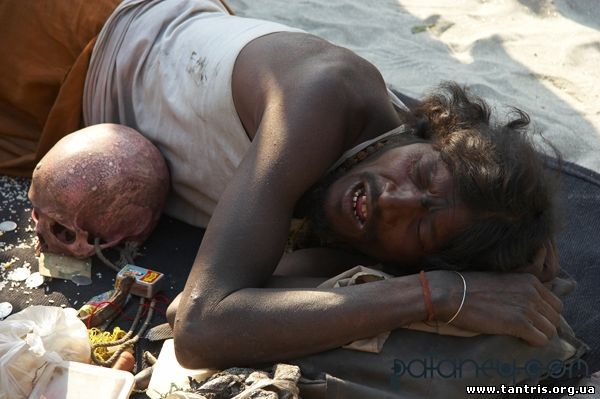 Recently I“ve read a book by Robert Svoboda “To the left hand of God.” It could also be called “the Story of an aghori”. Neither religion, nor philosophy could offer more severe spiritual austerity than AGHORA . The life of the hero of the book of Vimalananda causes a mystical desire to understand those who choose AGHORA as a spiritual way.
I mean Vimalananda“s living on a tree in wild jungle, eating only bitter local plants – I think even well-known Gottis couldn’t demonstrate such miracles of physical endurance. I’m talking also about Sadhanas, acting on the fresh corpse, even the thought of serving to the God in such a radical way is not obvious in the system of values of any culture. And eating fresh brains from the skull out of the pyre…such picture is not for weak person! Fortunately, the author of the “To the left hand of the God” is not describing frankly in details all this freaky process unlike another authors as Jean Paul Sartr and Sorokin. Understanding the reader’s esthetic taste, Robert says that the ritual has nothing in common with the cannibalism-aghori is needed in rare cases to understand the unity of the Universe. Sadhu’s love to the Great Goddess is hardly understandable to the most passionate and devoted mother.
Quoting Robert Svoboda i admitted how people’s faces change: why to go in such extreme experience? But let’s accept that from our spiritual point of view we can deny and make diagnoses to aghori, explain and analyse his behaviour, approve and take him as an example. This book reminds us how we separate from our Absolute, for which there is no difference between human’s brain and exotic dish, tree in the jungle and luxurous palace. The separation is in our mind. But our mind deminds to define the value and sort everything :acceptable-unacceptable. Furthemore, the mind wants to settle for all the humanity, cause IT does know how the world is arranged. The mind is always ready to tell the God where he is mistakened. And that his left hand us not so good as his right one. Spiritual ego is such a tricky thing.